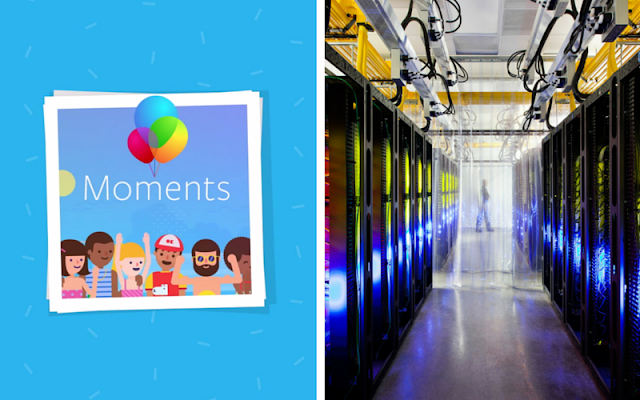 In an expected move, Facebook has rolled out a number of exciting new features to its visual-based Facebook Moments app. Also, Google has granted access to its perabit-powered server rooms for the very first time

“Facebook Moments, the social network’s recently launched photo-sharing app that aims to address the problem of getting friends to send each other the photos they’ve been hoarding on their own phones, is expanding to video.
The app received its first major update today since its mid-June debut, and will now automatically create a video of your shared photos which you can customise, personalise and share back to Facebook.

“With the update, Facebook Moments will automatically create a music video for any grouping of six or more photos. You can then tap this video in the app to customise it further by changing the included photos and selecting from about a dozen different background music options. When you’re finished making your optional edits to this video, one more tap will share the video directly to Facebook and tag the friend or friends with whom you’re already sharing those photos.

“The added feature could make the app more compelling for those who didn’t yet see the value in the photo-syncing option it previously offered. As Facebook Moment’s early adopters begin to share out their video creations to Facebook for others to see, their friends may be more inspired to try out the app for themselves.”

Google grants rare access to its mammoth server rooms, 10 years after going it alone with own tech


“Google has given everyone a rare look inside its server rooms and detailed how keeps up with the massive growth of its search business. In a blog post, Amin Vadat said that the company’s current network, Jupiter, can deliver a petabit per second of total throughput. That means each of its 100,000 total servers can randomly speak to each other at a speed of 10Gb/s, a hundred times faster than the first-generation network it created in 2005. To get there, Google did something surprising – it built its own hardware from off-the-shelf parts.

“Back in 2004, Google decided to stray away from products created by established companies and build its own hardware using off-the-shelf chips from companies like Qualcomm. The aim was to put less onus on the hardware and more on software, something that’s impossible with off-the-shelf switches. Vadat explained that hardware switching is “manual and error prone, and could not scale to meet our needs.” Using software switching was not only cheaper for Google but easier to implement remotely – critical for a company whose bandwidth requirements have doubled every year.

“Google considers its servers as a key advantage over rivals like Microsoft and Amazon, so why is it talking now? For one, it’s recently started selling its cloud services to other businesses, so it’s keen to brag about them. It’s also being pragmatic – its data requirements are now so huge that it needs academic help to solve configuration and management challenges.”


“As an eager, fresh-faced 19-year-old, I turned up at Google – at the time, a 3,000-person tech company – ready to dive headfirst into anything. Over the next six years, I discovered that the Google lifestyle meant more than just an on-site laundry service and free gourmet meals. I was one of the youngest employees on staff, but nobody held my hand. Within weeks, deadlines, duties, and complex projects began to pile up. I hadn’t even taken a finance class, yet I had two weeks to put together a strategy for entering Africa and Eastern Europe. I had to be resourceful.

“As a tech entrepreneur today, that sink-or-swim experience influences nearly every move I make. Here are five of my top takeaways from my time at Google early in my career.

“Working at Google gave me a set of values that have grounded my work ever since. What’s so remarkable about the company – and what I’ve tried to replicate ever since – is that team members at every tier have the power to affect company-wide change. That’s a benchmark every leader should strive for.”