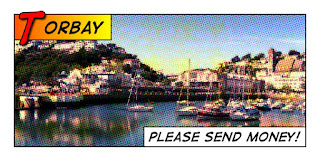 Tourism businesses across Torbay could be asked to contribute to a new fund to attract more tourists to the resort.

The English Riviera could be setting up a new business improvement district right across the Bay.

Certain businesses, directly benefiting from the three million visitors to the resort, would be asked to vote for the BID.

Then all businesses of that kind would have to make a contribution to the fund, based on a percentage of their rates, which it is estimated could raise £500,000.


Chief executive of the English Riviera Tourism Company Carolyn Custerson said at an industry update that public spending on tourism promotion is being slashed up and down the country as it is only discretionary for authorities.

She said the industry was 'lucky' that Torbay Council still contributed £500,000.

For example, Destination Devon Limited will close on March 31 as Devon County Council has reduced funding. The six area tourism partnerships will now work voluntarily together to protect and promote the 'Visit Devon' brand.

"Across the country funding for tourism promotion is being axed left right and centre. You don't know how lucky you are to have a council and a mayor which totally supports tourism," said Mrs Custerson.

"With 21 per cent of the population reliant on tourism, investment is crucial for sustained economic regeneration."

Mrs Custerson said she could see money from the Regional Growth Fund for the Bay.

But in the longer term the company board would be considering setting up a business improvement district which would run up to the borders of existing town centre BIDs in Torquay and Paignton which are raising money to promote and improve those areas.

She said after the briefing: "It is very early days yet, we don't know in detail how it would work. It is something being considered by cities like Bristol and Birmingham to generate a marketing budget. Visit Cornwall are also looking at it.

"It wouldn't mean businesses would have to pay into a BID twice, and it would be businesses who directly benefit from tourism, such as food and drink, accommodation and, for example, taxis, who contribute.

"If we could get more money from advertisers we wouldn't need a tourism BID, but I have to look at the sustainability of the company post 2016. Our council funding is only guaranteed to 2016.

"A BID would run for five years, with the possibility of being renewed. We have calculated a 1.5 per cent levy on 1,800 businesses would generate a minimum of £500,000 a year."

All the 1,800 businesses involved would then get free listing on the website, iPhone app and other marketing material.

She said the promotional partner initiative would continue with businesses paying more for a larger presence on the material.

Mrs Custerson said: "We are spending £500,000, but that is still well down on the £1.5million which used to be spent in Torbay. If we spent £1.5million we could double the number of visitors and I think we should be spending £1million."

But she said the ERTC board was concerned about the financial climate and the timing of any BID.

"It takes two to three years to get going as you need a 51 per cent vote," she said.

"But a Plymouth Waterfront bid has just been voted for with all the restaurants and nightclubs supporting it.

"I think it's very exciting."

The Tourism Management Institute also reported that VisitDevon is to be disbanded and replaced with a voluntary tourism partnership. Devon County Council announced it no longer had the funds to support VisitDevon.

Councillor Will Mumford said “There was a duplication of websites between VisitDevon, the tourism partnership and the industry sector...It's about getting a layer of duplication out of the process... this new organisation enables us to market Devon as one brand."

"It's also about promoting the area and I'm confident the tourism partnership will do a better job than VisitDevon has done” he added. However, local tourism business owner Ruud Jansen Venneboer of multi-award winning Mazzard Farm disagrees, he commented “My god, if as a County 'we' can't even afford 2 people on a payroll fighting their corner for tourism in Devon, why on earth am I paying business rates?”

This was also just after David Cameron had forecast a huge boost for tourism in the Westcountry as the Prime Minister urges the region to "get behind" the London Olympics.

Mr Cameron says there is "no better time" to showcase the "special" South West in the weeks before the Games' opening.

Presumably also no better time to shut down the tourist board as well!