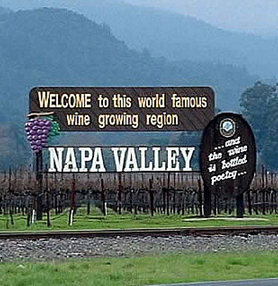 
“We’re weathering the storm much better than other destinations,” he said. “Our numbers are up. The picture is good.”

Continuing this blog's focus on Tourism Business Improvement Districts the following article on Napa Valley highlights where this approach seems to be working very well, on many levels.

Gregory was speaking to more than 160 winery, hotel, restaurant and other visitor-serving business people who attended the Napa Valley Destination Council (NVDC) mid-year update on Thursday.

During the afternoon meeting at the Meritage Resort, Gregory and his staff recapped marketing and other efforts from the past six months. Gregory had good news to report. In Napa County, lodging occupancy rose to 67.2 percent, up 7.1 percent when compared to the same 10 months last year, Gregory said. The average daily room rate climbed 7.3 percent to $234.85 over the past 10 months, he said.

Visitors seem to be finding their way to the area as well. According to the council, 115,489 people have visited the new downtown Welcome Center from April to November.

The marketing efforts are made possible by the Napa County Tourism Improvement District (TID) lodging assessment.

The TID, created in 2010, imposes a 2 percent assessment on the bill that county visitors pay for lodging. The money is to be used to fund visitor-serving activities and draw tourism to Napa Valley. Using those funds, the NVDC was able to create a $4.3 million marketing budget for the current fiscal year, July 1 through next June.

On Thursday, representatives from individual Napa County cities presented their own marketing efforts and some results.

American Canyon has a new slogan: “Discover How Close You Really Are” and is forging new partnerships with the neighboring Carneros region.

St. Helena recently opened a new welcome center and created a new slogan of its own, “Napa Valley’s Main Street.”

Chris Canning of Calistoga’s Chamber was delighted to announce that more than 7,000 people attended the city’s annual Lighted Tractor Parade this month. The event received some national media attention and a number of local restaurants set retail records during that event, he noted. Transient occupancy tax is up 11 percent in the northern Napa County city, he noted.

“It’s fascinating that there wasn’t anything like this a year ago,” Nancy Bialek, executive director of the Stags Leap District Winegrowers, said after the meeting. She came away with new ideas for more collaboration between the appellation she represents and the town of Yountville.

“There seems to be an opportunity to do that,” she said.

“The TID gives everybody a feeling of being more connected (rather) than just individual communities,” Darcy Barboza, director of retail operations for Trinchero Family Estates, said.

“It brings us all together, and we all benefit,” she said.

Steven Sansone of Cosentino Winery said he likes how the NVDC is selling Napa Valley as a whole. With new promotions in different kinds of media from print to online technology, “They’re making it simple for the consumer to get what they want,” he said.

“It’s great to see what the other towns are doing,” Andrea DeTrinidad of Mount View Hotel & Spa in Calistoga said.

“Each town is creating their own image under the umbrella of the Napa Valley brand,” she noted. “These are collaborations that wouldn’t have been possible without the TID money.”

“The TID is an investment in the future,” Bob Hurley of Hurley’s Restaurant & Bar in Yountville said. “This is an approach with legs,” he said. “They’re unifying the valley — nobody has done that before.”

“This is a whole new animal,” Jim Beazley, owner of the Beazley House bed and breakfast, said of the NVDC and the TID. “This is a race horse. For the first time we have money, and that is like oxygen for a destination.”

With the TID funds, “Napa Valley is finally able to tell its story,” Beazley said.

“There have been a number of years when our story was being told by Sonoma or Monterey,” Beazley said. “If you don’t have the voice, your competition tells your story for you.”

“Napa Valley is now ahead of the curve,” he said. “We’re not playing catch-up. We’re in the lead.”