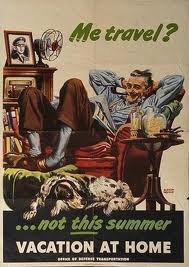 The 'staycation' trend is still going strong, according to VisitEngland, which released figures showing that the number of people taking breaks at home in 2011 is consistent with last year.

(This of course has nothing to do with the fact that due to the recession many people have no other choice than to holiday at home - Ed.)

Overall, seven out of ten consumers have either taken a holiday in England this year or are planning to do so over the coming months, the survey found.

The same proportion (70 per cent) of the population are intending to visit a destination in their own country in 2012, with most set to go away for between one and three nights.

Domestic getaways appear to be providing positive experiences for travellers, with more than four out five (83 per cent) people rating their trips as either 'excellent' or 'very good' this year.

James Berresford, chief executive of VisitEngland, said the rising popularity of breaks at home is leading many consumers to visit destinations they would not have otherwise considered when planning a holiday.

He added: "Although numbers are not quite at the unprecedented levels of 2009, people are obviously still very keen to holiday at home and take great pleasure in exploring new places as well as revisiting well-loved ones.


"It is vital that we continue to work hard to keep this trend buoyant and take full advantage of England being placed firmly [at the] centre [of] the world stage in 2012."