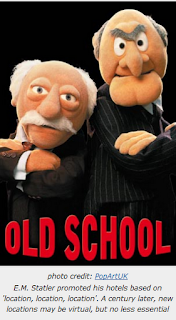 Ninety years ago, Ellsworth Statler, father of the modern hotel industry, was quoted as saying “There are three things that make a hotel famous – location, location, location.” Many today might argue that the complexities of today’s travel industry dictate a much more sophisticated approach to marketing and promotion.


I disagree – the future of hotel marketing will still be led by those that master “location, location, location.” The major difference is that the definition of the three locations will have changed dramatically over time.


An underlying reason for this change is the paradigm shift driving new interactive media based marketing processes:
These three stages have created hotel industry’s three new critically important “locations:”
E. M. Statler changed the hotel industry in two radical ways: First he revolutionized hotel design and development; then he ran guest-centric operations where the customer was king. Remarkably, his philosophies are just as relevant today.

Statler specialized in large, centrally located properties that became a focal point for a city. His first property, offering 300 rooms, opened in Buffalo in 1908. In 1912, he opened a larger 800 room property in Cleveland. But the big change occurred in 1915, when he opened his Detroit property with 800 guest rooms, each including a private bath – This created a completely new category of hotel. The following year, he opened Hotel Pennsylvania in New York – the largest hotel of its time at 2,200 rooms, each again with private baths.
Statler made it impossible for a traveler seeking for a hotel to miss his hotel. Future hotel marketers will benefit from employing the same strategy to virtual search processes.
Prominent placement on a search engine results page require traits that parallel those that characterized a Statler Hotel – high traffic, community relevance and differentiated content. To succeed in the future, hotel marketers will be competing aggressively for search relevance, links with major traffic sources and to create unique content. The prime real estate for marketers will continue to reside at the top of the search engine rankings.

Social networking would have been a concept Statler could have inherently understood and embraced. As Statler lived prior to the advent of mass media, his geographically targeted “location, location, location” marketing concept was predicated on the local citizenry providing strong word of mouth recommendations and positive editorial reviews in local newspapers.
How did Statler gain the allegiance of the travelers and local community? Even more important than the hotels’ physical structures, Statler made certain that true hospitality was the foundation of his hotel empire. His two most important quotes did not refer to the modern new facilities he had created. E. M. Statler’s singular focus was the guest.
“Life is service” and “The guest is always right” are edicts that are known and practiced daily by every great hotelier.
There is no greater strategic combination than dedication to uncompromised customer service delivery and ensuring guest satisfaction that will guarantee top ratings on user generated review sites. Great service is timeless.

The third new “location” is less closely related to the physical location of the hotel, than the specific location of a guest at any given time. Hotels that have been successfully discovered and earned sufficient trust from its guests will be afforded a degree of customer access and intimacy that was previously impossible to achieve. Through interactive and highly personalized location based services, the hospitality industry will gain direct access to travelers, enabling customized discounts or value-added offers in a real-time decision making environment. Organizations that respect and protect the privacy and persona of the customer, while providing high value opportunities for memorable experiences, will benefit from a level of engagement that will not only reinforce brand preference, but feed social networks with reputation enhancing endorsements.
This level of customer interaction will support the prospect of lifetime relationships between the traveler and any hospitality organization. The hotel or resort that can win and sustain consumer loyalty will benefit from the ultimate location – close proximity to the customer’s heart and mind.
In case you were wondering, three hotels originally run by Statler during his lifetime are still operating today: The St. Louis Renaissance Grand Hotel (1917), New York City’s Hotel Pennsylvania(1919), and the Boston Park Plaza Hotel and Towers (1927). A fourth, The Statler Hotel, an integral part of the Cornell University School of Hotel Administration in Ithaca, NY, is named for Mr. Statler, as is the building housing the hotel school itself – both in recognition of the contributions made by The Statler Foundation, a major benefactor to the university.
Unfortunately, there was one additional Statler saying, my personal favorite, that did not live on eternally like his others. However, I’m thinking that it could potentially become a legendary Twitter promotion to capitalize on the Statler heritage for any of the properties… The saying was “A room and a bath for a dollar and a half.” Now THAT would be Old School marketing…