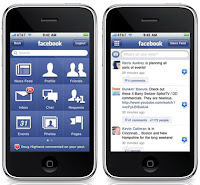 Facebook has their sights locked on mobile. We know that. At the recent GigaOm’s Mobilize conference, Facebook Mobile Chief Erick Tseng touched on just how crucial mobile is to them — and more importantly, how crucial it will be.

Just how crucial are we talking about? Within 1-2 years, Tseng sees Facebook becoming as much of a mobile company as it is a desktop/web company.

“It’s interesting that if you take a look at our top line of growth, we’re getting to the point that the countries we’re getting into now are ones that don’t really use computers at all. The predominant ways people are connecting in Africa, in India, is through their mobile devices. As Mark touched on a few days ago, we now have over 350 million mobile users. Within another year or two, we’ll be a mobile company, with 1/2 mobile users.”

It’s kind of funny to think that Facebook might not already think of themselves as a predominantly mobile company. They’re already the most popular app on nearly every smartphone platform, are deeply integrated into countless Android devices, and 43% of their active user base of 800 million is using mobile on a regular basis. What else can they really hope for? Oh, thats right: to take over the mobile world with a development platform of their very own.