The following diagram illustrates how we can take the data for one business [e.g. Tatton Park] and distribute via the iVisitor Guide network. This unique online distribution model greatly enhances the probability of Tatton Park being discovered by online consumers searching for ideas on things to do etc. 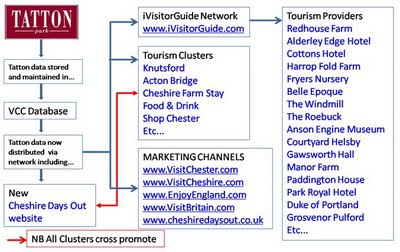 iVisitor Guide is proof of a strategy that is based on the Long Tail. The Long Tail was first proposed in an article written by Chris Anderson in an October 2004 Wired magazine which described the niche strategy of businesses, such as Amazon who sell a large number of unique items, each in relatively small quantities. “Anderson argued that products that are in low demand or have low sales volume can collectively make up a market share that rivals or exceeds the relatively few current bestsellers and blockbusters, if the store or distribution channel is large enough.”

This Long Tail strategy, where the combined total generated by many small outlets (or niche sites) actually outperforms the main channel, is potentially a highly effective and powerful marketing tool. Even though we are barely past the pilot stage we already have the evidence that the iVisitorGuide network is an extremely efficient way of getting greatly increased online marketing exposure for the region’s Tourism Providers.

On the recent successful iVisitor Guide pilot the average increase in online marketing exposure for the participant tourism providers was 244%.

If you'd like to benefit from a massive increase in marketing exposure please contact me to find out more.