Does TripAdvisor have a problem with fake reviews? 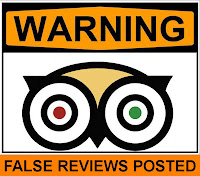 The answer matters to Daniel Corcoran and a group of contributors to TripAdvisor's Baltimore forum. It should matter to you, too.

TripAdvisor.com, which claims to be the world's largest travel site, bills itself as a place that offers "trusted advice from real travelers." Corcoran, an office administrator in Baltimore, says that trust was broken when a string of flattering write-ups about the Sheraton Baltimore City Center Hotel began appearing on TripAdvisor and Sheraton's corporate site in June.

"These reviews have always awarded the hotel the maximum five stars," he says. "They gush about the wonderful service."

Corcoran has never stayed at the hotel, so he can't say whether the reviews are fair. But the sudden influx of raves aroused his suspicions. As part of a group of self-appointed travel-website watchdogs, he's aware that some properties have found ways to sprinkle the Internet with bogus reviews.

So what's the problem?

When questions about the authenticity of a review are raised, the legions of reviewers who made TripAdvisor what it is today deserve a prompt and unambiguous answer. In fact, we all do.

Read the full and Original Article by Christopher Elliott

Christopher Elliott is the ombudsman for National Geographic Traveler magazine and the co-founder of the Consumer Travel Alliance, a nonprofit organization that advocates for travelers. His column runs twice a week at seattletimes.com