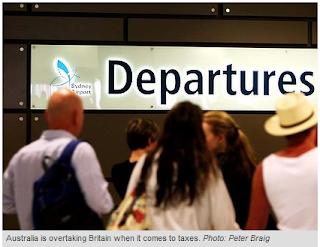 Australia has entered the competition to see which country can impose the biggest travel tax – and we're already winning in at least some categories.

The global champion is Britain, which has made itself the most unfriendly country in the world for travellers with its infamous Air Passenger Duty (APD), which now costs £92 ($147) per head for travellers to and from long-haul destinations such as Australia.

But, not to be beaten, Australia’s money-hungry government has just increased its departure tax from $48 to $55 for every international traveller regardless of origin or destination, far outstripping Britain’s measly £13 ($21) for trips of up to 2000 miles (3200 kilometres).
Read more: http://www.smh.com.au/travel/blogs/travellers-check/tourism-the-loser-as-tax-grab-targets-travellers-20120514-1ylx4.html#ixzz1upykTW2t