How Hospitality Companies are Using Social Media for Real Results 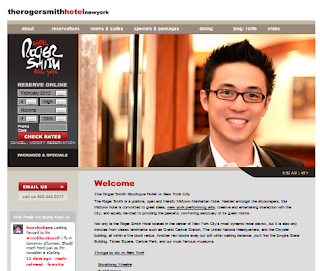 At the Roger Smith Hotel in New York, social media has become immersed within the hotel’s unique culture.


At its core, the Roger Smith Hotel is about storytelling — with a focus on art and people — and social media has become the way in which the hotel can share these stories and create new ones.

In fact, Brian Simpson, the hotel’s director of hospitality, says that while the hotel certainly attempts to connect the dots between social media and sales, ROI is not the focus of the team’s social endeavors. “We’re less concerned about how many rooms are booked because of social media, and more focused on telling stories and connecting people … you can’t pay a marketing firm to make those connections.”

It’s this type of open thinking that keeps The Roger Smith at the forefront of the social media curve.

Simpson primarily relies on Twitter, Facebook, YouTube and the hotel blog to distribute and collect stories,
but also recognizes the value of location-centric social networks like Foursquare and Pegshot. He approaches each social site with a different strategy, saying, “We take all of these stories and figure out which social media networks support them best.”

Simpson points to an event from 2009 as a catalyst for some of its creativity. The artsy hotel then hosted a Social Media Breakfast, which led to interest from other social media and web groups, and ultimately inspired Simpson to actively immerse himself in the social media culture.

Because The Roger Smith is independent, Simpson found ways to bend the rules for groups and startups, making the hotel inviting to all types of social media event organizers. For Simpson, exposure is key and hosting these events helps get the hotel’s name out there. Today, the hotel is essentially the social media-friendly hotel of New York; events are booked for each night of the week and its become the official hotel of many a New York web conference.

With storytelling at the center of everything the Roger Smith does online and off, Simpson is also looking for the next great way to engage current and potential guests. He says, “now that everyone’s on Twitter, and everyone has a Facebook Page, our objective is to find out what’s next and stay ahead of the curve.”

The hotel is also being extremely avant garde with its approach to installation art. They’ve commandeered an art studio on Lexington Avenue outside the hotel and turned it into an experimental space where art meets social media. The space is dubbed the RS Pop-Up Shop, or RS POP, and it’s open to up-and-coming designers and artists who want to showcase their work with social media flair. Each selected RS POP participant is heavily supported with social media exposure, so artists and designers are featured both in the art studio and online via the hotel’s social media channels.