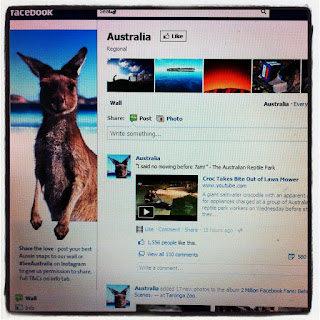 Tourism Australia's Facebook page has claimed the title of the most popular tourism page in the world and the nation's travel authority has vowed to increase its spending on social media after this success.

The page (Facebook.com/seeaustralia) passed the 2 million-fans mark following the success of a short film shown via the page on New Year's Day.

He said digital accounted for about 30 per cent of the group's total marketing budget but this would be increased ''quite significantly'' this year, with social media expected to get the biggest boost in funding.

''It's always better to have other people telling your story. The whole traveller to traveller conversation online is growing and it carries a lot of weight because people see it as unbiased.''

About 70 per cent of Tourism Australia's annual $130 million budget is spent on marketing. The increased spending on social media will not be limited to Facebook but will include popular websites such as tripadvisor.com.

Mr Baker said the Facebook page also acted as a planning tool, with links to attractions that people had recommended as well as to people's reviews of those sites and events.

''Social media has a lot of power that we can leverage,'' Mr Baker said. ''There's new ways to look at the value of the customer, for example trip echo, where once someone leaves, whether or not they come back, we look at what they tweet or blog or whatever about us.''

However, he warned that social media should not be used to push out marketing messages, as people would quickly become disinterested. ''It's not a golden bullet, it takes hard work and a lot of understanding about what people are interested in.''