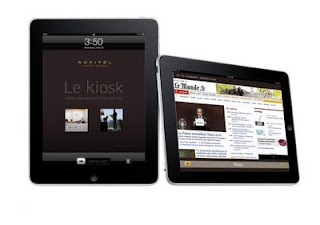 For a night of clubbing in Manhattan on a recent weekend, Seunghee Thomson turned to the iPad in her room at the Mondrian SoHo to ask the hotel’s concierge for a recommendation.

The concierge desk, which received her iPad message, soon called with a name and directions. “While I was waiting, I was thinking maybe I should call back to see if they got my message, but they called me back right away,” says the fashion stylist from McLean, Va. “It’s the first time I’ve had that experience in a hotel.”

Mondrian is one of several hotels — and airlines, too — that are distributing iPads and similar devices to customers in an effort to tap the buzz surrounding tablet computers. The effort is the latest by the travel industry to digitize a range of services that once required picking up the phone.

“It’s a self-service vehicle,” says David Adelson of Intelity, which developed Mondrian’s app and has about 380 hotels using the software. “Most travelers are used to self-service solutions in their daily lives and would rather prefer it.”

The hotel industry has been trying to automate guest-service transactions, particularly room service orders, for several years, but has been held back by technological limitations. The surging popularity of apps and smartphones may provide the increased operational efficiency and generate the additional room revenue they’re seeking.

Instead of hotel staffers answering guests’ calls and rerouting requests, orders placed in the software are sent directly to the department handling the service: room service orders to the kitchen, requests for toothpaste to housekeeping.

“For a lot of hotels, it’s an extension of the kiosk mentality,” says Michael Planey, a travel technology analyst. “The app economy is about giving people control of their own environment.”

Executives at Intelity and its competitors — including Ascension Software and Runtriz — say their apps can generate more sales for hotels as other revenue sources, such as phone and movie charges, are dwindling.

Seeing food photos and other buying options presented in a non-intrusive way often leads to more orders, says Joe Adkisson of Ascension, adding that room service orders at his hotels have increased 15% to 20% with the apps.

In embracing the digital format, hotels can also quickly update menu changes and deliver up-to-the-minute information about facilities and deals. The Phoenician in Scottsdale, Ariz., for example, sells a “Dinner on the 9th green” package through its app.

“You have our own little Groupon targeted at your guests,” says Matthew Allard, CEO of Runtriz, whose guest-service software is available for about 40 hotels, including the St. Regis in New York, the Beverly Wilshire Four Seasons in Beverly Hills and the Hard Rock Hotel in San Diego.

Several upscale hotels, including the Plaza and Royalton hotels in New York and the Hilton Inn at Penn in Philadelphia, are touting the technology and inviting guests to try it by providing iPads in rooms.

The iPads are “locked” for the hotel services only, and guests aren’t allowed to modify or download other apps, says Adelson of Intelity, which works with the hotels. Guests are charged for the device if they forget to return it.

The Beverly Wilshire offers iPads only for suites. The iPod Touch in all guest rooms at the Conrad hotel in the Maldives makes updating the hotel’s 50-page menus and information about its inventory of wines easier, says Allard of Runtriz, which developed the app.

“We can … save a ton of money in printing and shipping,” he says.

Distributing iPads is too expensive and cumbersome for most hotels, says Adkisson of Ascension, which has developed guest-services apps for about 100 properties, including W and Omni hotels. “It sounds cool, but there seem to be issues with cost and keeping them clean from both software and physical standpoints,” he says.

Avaya, an Internet telephone technology developer, is also eyeing the market, introducing its own tablet-size device that’s connected to the hotel room phone and allows guests to order food or request services using touch-screen icons. The device has been installed recently at all rooms in its trial customer, Hotel Ignacio in St. Louis.

Most hotels will ease into the technology with phone apps, while others, such as Wyndham Hotels, have installed the PC-version as the welcome page of their Wi-Fi service.