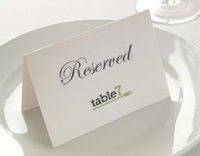 Some of London's most high-end restaurants have signed up to a new service that aims to fill vacant tables, particularly at 'off-peak' dining times, by offering discerning diners discount prices.


It works by optimising the usage of excess capacity for restaurants by introducing the economic model of variable pricing - the model adopted by airlines to fill empty seats.

table7's members are typically offered a discount of 30% off their entire bill when they book.

To ensure the commitment to the booking, a fee of £7 is charged to the customer. table7's discount is discreetly added by restaurant staff at the end of the meal, when the bill is presented.

There is no set-up charge for restaurants to use the service. Instead, table7 takes its revenue directly from the customer when bookings are made.

Ashwin Jain, who formerly worked in the City with Deutsche Bank, co-founded table7.

He said: "When applied to the high-end restaurant sector, the concept of variable pricing creates huge opportunities. The high levels of service mean that these restaurants have high fixed-costs. However, demand throughout the day is variable, meaning that their income fluctuates. table7 is attempting to boost the yield on capacity during these times.

We created table7 as a vehicle to apply the variable pricing model without compromising the brand values of these businesses that rely on a reputation of excellence and satisfied customers to deliver long-term value. To date, we've been overwhelmed by the response to the service.

Already, we have Michelin starred-restaurants and establishments from some of the world's top chefs set up on table7. By connecting them with new, discerning diners, we hope to foster word-of-mouth recommendations for their businesses amongst influential peers and build greater, long-term profitability."