4 ways to get your mobile content to your customers 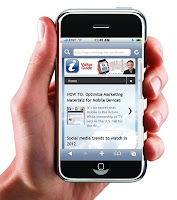 Mobile apps have become a household name during the past few years and as smart phones are gaining more and more popularity it seems that every company in the hospitality industry should invest in some form of mobile presence.

The problem now is that there are so many apps out there in them stores that it’s more and more difficult to stand out, to differentiate. Other challenges include determining what brand of mobile presence is best suited for your particular company.
Would an iPhone app be sufficient or would it be better to bank on the rising popularity of the Android OS? How about the new Windows Phone 7 OS? Now that Nokia and Microsoft have formed a strategic alliance, will they be able to attract a large share of users in the coming years? Or how about a cross-platform mobile web site or even a mobile web app?

We touched on the subject of native applications (iPhone/Android/WP7 apps) versus the mobile web (browser-based web sites and apps) on a recent blog post, so this article won’t go into that. Suffice to say that each option has it’s benefits and disadvantages, but when it comes making your mobile content as accessible to as many users as possible and lowering the barrier to use, we believe mobile web sites and apps are a clear winner. So here are four ways to get your mobile content to your customers as easily as possible:

1. Skip the appstore
Hospitality mobile apps are often location-specific, which means that you want people to use your app inside the operating area of your business. This means that you want to market your application to users on location. You might have some brochures and signs which can inform your customers of your iPhone app. So what do you write in those? Perhaps you can write something like “To get our iPhone app from the Appstore, tap on the app store icon in your iPhone’s home screen. Choose the “Search” tab and search for “companyxyz”. Download the app by entering your appstore account password. Once the app has been fully downloaded, tap on the icon of the app and you can start using it”.

Ok, I admit, those sound like instructions for someone who’s never downloaded an app before, but it does show all the steps the user has to take to actually start using your mobile content (besides, these cases do exists in the real world). However, nowadays people tend to have a quite a short attention span when it comes to accessing digital content.

The difference is quite big when it comes to mobile web apps. First of all you don’t have to exclude the customers who don’t have an iPhone and you can just add a much shorter mention in your brochures and signs. Perhaps something like “For mobile guide, head over to: http://companyxyz.mobi”? Pretty short and unambiguous

2. Contactless services
NFC stands for “Near Field Communication”. It is a short-range wireless technology that allows for the exchange of data between two devices in close proximity. NFC has been the buzzword for this year and people have been getting very excited about it and the possibilities it offers for mobile payments. The downside? As of yet, there aren’t that many mobile phones that actually have the technology. However, all of this is to change in the near future as NFC-capable devices start to flood the market:

“Orange expects that by the end of 2011 over half of all new smartphone models to be added to its range for Europe will be optimised for mobile contactless services.”,– Orange mobile operator at Mobile World Congress 2011


Google’s latest Android device (Nexus S) already has NFC tech inside and the rumors are indicating that Apple would be joining the gang too with the next iPhone model, which would definitely bring the tech to the masses. Mobile payments aside, there are other simpler ways to employ this technology, like pushing a web address to a mobile device. Imagine a world where a customer checks into a hotel and would be prompted to get the hotel’s mobile guide by just tapping his/her phone to a specific area on the desk, where NFC would be employed to push the URL of the hotel’s mobile web app to the browser of the customers mobile phone. This would bring the web app’s already low barrier to use even lower.

3. QR-codes
QR-codes are two dimensional matrix barcodes, that can be scanned with camera phones that have a reader application installed. The funny looking squares are becoming popular in advertising where a QR code is included in the ad and scanning it takes you to a campaign web site. Including a QR code in your brochures and signs in addition to the web address of you mobile web app makes it more effortless for your customers to access your mobile content. Instead of typing the URL in to the browser, the user can just scan the QR code and be done with it.

4. An open Wi-Fi network with a captive portal
This one is a bit more unorthodox method but can be very effective and it doesn’t require any special technology in the device (NFC) or any third party apps to be installed (QR codes). You might have come across cafés or hotels where there is an open Wi-Fi network. When you join that network and try open a page, it just shows you a sign-in page where you have to enter an username and password, which of course you have to buy from the café or hotel. This is called a captive portal and it essentially means that unless you’re signed-in you can’t go to any other web page than the special sign-in page.

Now imagine if you’d have an open Wi-Fi network at a hotel named “Mobile Hotel App”. Joining the network and going to any web page would take you straight to the mobile web app of the hotel. Basically the network would only allow you to access that one URL, which would be the mobile web app. This could make it easier for hotel customers to discover the hotel’s mobile content even without any brochures or signs. The network could be named unambiguously so the user’s would understand what content they would get and all they would have to do is open their mobile browser and hit refresh to access the mobile web app. This would actually not be limited to mobile devices only but same content would be accessible with laptops and tablet computers or any other device with modern browser.

NB This article was written by Timo Pietilä and first appeared on Zonear.com