How To: Optimize Marketing Materials for Mobile Devices 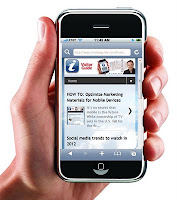 It’s no secret that mobile is the future. While ownership of TV sets in the U.S. fell for the first time ever, smartphone ownership continued to explode — it’s up 60% versus a year ago. Marketers who had traditionally focused on getting their message across through broadcasts on television and radio or in print magazines and newspapers are quickly working to adapt their messages for mobile.

Mobile is a new paradigm. It has its own rules, standards, technologies, and challenges. Here’s how marketers are working with designers and developers to optimize branded materials for these new platforms.

The golden rules of mobile: simplicity, brevity, accessibility. The screens are small, the Internet connections slow and people don’t have a lot of time. The best mobile experiences are those that condense the bigger picture into a bite-sized chunk, friendly for on-the-go consumption.

“Successful mobile websites and applications will do fewer things, but do them better,” says Daniel R. Odio, CEO of PointAbout. On mobile especially, it’s important that things ‘just work.’ ”

Think about the use cases for different consumer devices. Nicole Amodeo, director of creative products at the mobile ad platform company Medialets, stresses three key points for anyone creating content for mobile: “Why, when and where does your consumer use a device?” When exploring answers to these questions, it’s important to allow “your target audience and their particular use cases to dictate the experience, the content, the features and utilities,” Amodeo adds.

Before deciding on a platform for mobile marketing material, think more about what makes the most sense for the user and use cases. For example, does it make sense to create create an app, or phone- and tablet-optimized website?

There are two key points for designing for mobile: speed and usability. Content on a mobile is commonly created for an “on need” basis. A user browsing for online content on a mobile device is generally searching for something specific, not just casually surfing the web.

A user will need to gather the data they are after, quickly and easily without having to wait a long time for a page to load on a 3G connection. Therefore, when converting a traditional website into a mobile version, it’s important to make sure a number of things happen:

One of the largest challenges in designing for mobile is the vast amount of devices to cater to. Rather than designing a mobile-specific website, responsive design allows websites to automatically adjust to a devices resolution, orientation and feature set.

The technology behind responsive websites is a relatively simple mix of CSS and a flexible grid-based layout. The best responsive websites even take into account device rotation, displaying different content depending on if the phone is in landscape or portrait mode. Taken to the extreme, a responsively designed site might even use GPS to display content relative to a user’s location.

The world hasn’t completely transitioned to mobile (yet). Until that day, one important way to leverage traditional media is to tie it into mobile. What are an ad’s viewers being asked to do, and can they do it on mobile? If an ad is going to be seen by consumers on the go, making mobile-friendly calls to action is important. If an ad asks users to check out a website, make sure the website loads well on a smartphone.

Embrace mobile technology. Instead of asking users to call a phone number or visit a website, use a QR code to let consumers quickly learn more about a product or even receive some sort of exclusive content, such as a free MP3 or other product tie-in.

Sometimes the best way to optimize marketing materials for mobile is to create an app. Users expect apps to complete simple, narrowly defined tasks quickly and easily. Think about how simple many popular mobile apps really are — they do one thing and they do it well.

The most successful way to market through an app is to create some sort of branded experience, tool, utility or game that both transmits a marketing message but still provides a level of utility and enjoyment for users.

A fantastic example would be the toilet paper brand Charmin’s app, which helps users locate the nearest public restroom.

There are many design and development tips to keep in mind when optimizing marketing — or, for that matter, any — content for mobile. But it all comes down to leveraging design and technology to keep things simple, clean, fast to load and easy to digest on the go.

This article first appeared in Mashable on May 17th, 2011 written by Ryan Matzner